I keep some reminders to myself here about how I configured Debian on my system to overcome certain hardware issues.

Scroll-Wheel Emulation on my Marble Mouse

It took some doing to get my 4-button, no-scroll-wheel, trackball to work the way I wanted: Holding one button causes movements of the ball to be interpreted as scrolling, and the other 3 to behave as ordinary button on a 3-button mouse.

Tearing on the HDMI screen

My Panasonic TV has a refresh rate of 59.97Hz (1080p) while my LCD monitor is at 60.0Hz. Combining the two screens via Xinerama or TwinView will cause the system to ignore one of the screen Vsync. It would appear that no matter what I tried, I couldn't cause it to ignore the LCD's, it ignored the only one I really cared about.

Solution? Use two X screens (one per monitor).

256 Colour mode for VIM under SCREEN

Unlike some of my colleagues at work, I believe that syntax highlighting and colour in general makes applications more usable and enhances productivity. Furthermore, I think that more colours is better than fewer1).

So I set about working out how to enable 256-colour mode in my terminal (gnome-terminal / PuTTY), terminal manager (GNU screen), and editor (Vim).

Ubuntu 9.04 detected and supported printing on this USB printer without issue, but scanning was tricker. EPSON support pointed me at http://www.avasys.jp/lx-bin2/linux_e/spc/DL1.do which installs a SANE backend that gets all standard scanner apps working.

Also see Scanning for OCR and one-touch archiving of snail-mail.

Video playback would lock up X11

/var/log/Xorg.0.log showed that it was the nVidia driver causing problems.

mplayer with verbose output over an SSH session showed it was [xv] that was causing the problem. So I disabled extmod in /etc/X11/xorg.conf and the crashes have stopped. The GUI doesn't look quite the same though, for instance windows cannot have transparency anymore.

You can disable [xv] within exmod by adding an “extmod” subsection to your xorg.conf:

The mplayer package which comes with Ubuntu 7.10 doesn't seem to support dvdnav: playback. My attempts to compile mplayer from source with dvdnav support have failed, despite having libdvdnav4 and libdvdnav-dev installed correctly and using the mplayer1.0-rc2-with-dvdnav patch. It would appear that the “ogle” package is an alternative media player which supports DVD menus and most special features of DVDs. However it does not have an option to deinterlace the output, and mandates that xv is used to output the video. I am also unable to truly fullscreen it under Ubuntu 7.10's compiz-fusion installation (I get my deskopt menu bars at the top and bottom). Under metacity it doesn't appear to output anything sane, although there is sound. For now I'm sticking to using “mplayer dvd:” to watch DVDs, and just blinding working my way through all the titles on a disc until I get the ones I want. It's a nuisance, but it's not as annoying as interlacing artefacts.

Despite disabling the screen saver, and supposedly telling mplayer to disable the screen saver during playback, my screen kept turning off when I was watching DivX. The solution?

Actually, I've installed rt2x00 now (it's actually called that - the x is part of the name) because rt2570 didn't seem to support WPA-PSK encryption properly… Although I may have just been stupid. The steps are identical, but with rt2570 replaced with rt2x00

Once I worked out what to do, doing it was easy. It was all the mistakes along the way that made it hard.

This will show some progress, and then quit to a shell with a line something like this:

This is important, this is where I was missing the point. All this m-a stuff is just to create a package, you still have to install the package it makes for it to work!

Then removing and reinserting the dongle did the trick!

This created a couple of new devices, wlan0 and wmaster0. After making sure the wireless-tools package was installed I had to fiddle with my network interface config until it worked:

All I need to do to activate Wifi (and wpa_supplicant etc) is “ifup wlan0”.

Update: I decided to abandon WiFi and bought myself some Homeplugs instead. They worked flawlessly and didn't require any kind of tinkering, a rarity with technology.

Explicitly added my harddrives to /etc/smartd.conf:

I was trying to setup Linux software-RAID when I discovered one of my new drives was failing! While this was a good test to see how my SATA controller deals with such things2), it was at an inopportune time because I was still building the array, so there was no redundancy in the system yet. On the other hand, I didn't lose any data.

So, in an effort to educate myself and others about all this stuff, I'm going to put up some pretty verbose logs.

Automatic assembly not happening after an upgrade

After a routine upgrade and a reboot I noticed my RAID had not been mounted… and then realised this was because my RAID device was not assembled: cat /proc/mdstat showed that there were not disks in my current RAID setup. The disks were all present and accounted for though:

And I could manually assemble and run the array trivially:

So why doesn't it do this automatically during boot (and before auto-mounting everything in /etc/mtab)?

Short answer: because my RAID-members do not live within partitions.

Because I use the entire disk as a RAID-member, rather than a partition within the disk, udev does not probe the disk for its filesystem type. This in turn means that automatic RAID array assembly is never triggered.

The all-import environment variable ID_FS_TYPE, was absent. The sysfs data on my RAID-member disks looked like this:

The solution I used to arrive at the correct output, above, was to add a new rule to /etc/udev/rules.d/85-mdadm.rules which is triggered before the usual one:

For completeness here is my complete and working rules file:

Should remove / update this section, it's all working now

See S.M.A.R.T. for details on how to interpret the raw attributes.

I was probably just being stupid, but it seemed to me that mplayer wouldn't play MP3 sound.

I added the following repository to my apt config and “upgraded” mplayer from that:

I also injected the following into my mplayer configuration:

Ubuntu doesn't come with libdvdcss as a package, so you need to install it manually like so:

I have stability issues which I've yet to track down.

Update: Stability issues were due to a BIOS bug, which was provoked by the GUI it would seem.

I used the following guide: How to: Enable compiz-fusion in Ubuntu Fiesty

Removing the ubuntu-desktop and desktop-effects packages (as outlined in the guide) caused broken packages for me - I recommend running your favourite package manager after performing that step to fix anything that's wrong before installing any of the new compiz packages.

And here is a snapshot of my config, exported from the CompizConfig Settings Manager: robm_compiz_pref.profile

No sound when using my custom kernel. Had to reinstall using the instructions from here:

But that spewed out a lot of errors about cannot find Makefile_32 or compile assembly stuff. This was because my custom-headers were missing these extra Makefile for some reason.

A post in the Debian forum here had the solution:

Followed by a retry of the original instructions and all worked!

Using the instructions here I was able to get Flash and others to use PulseAudio and therefore share the sound-card properly. No more Flash stealing all audio until I kill Firefox!

Make sure digital-out is enabled!

Most guides tell you to use alsamixer to enable IEC958. If you have PulseAudio setup you may only get controls for that, and nothing hardware specific.

In my case I simply had to specify which card I wanted to control:

Both IEC958 settings should be green “00”, which mean enabled. There is no volume to speak of, so there's no vertical bar to play with. It's just enabled or disabled, where “muted” (“MM”) means disabled. Press m to toggle muted state.

Getting the System Mixer out over optical too

This one had me stumped for a while. PulseAudio appeared to be working fine - the pavumeter GUI app showed there was plenty of noise in the system; but only on the “front:0” output, which was the headphone jack on the front of my PC; no sound on the digital output!

So I started the command-line tool pacmd and checked which sinks were available:

Ah, it's the headphone port at the front alright - says so in the description! How do I add a sink for the S/PDIF port? First by checking how this sink was loaded, and trying variations there-of.

Check it loaded properly, and find what it's description is:

It's the digital out! Now to test it.

This came out on the headphones only, but that's because the default is still the “front:0” sink. You can move the stream to our new sink without touching the default:

Which tells me my mplayer test-case is stream 9, and I know from earlier output that my newly-loaded sink-module is index 1. We therefore say move sink-input number 9 to play through sink number 1.

Bingo! Sound through the digital out plays on my amp immediately!

I found that my sound didn't work until I ran iecset and put my SPDIF-out port into audio mode:

I use the following when I want mplayer to spit it's audio track straight over the optical link (for decoding by my amp):

To mitigate these problems I have a little shell script which will only use this trick for videos which will benefit (i.e. if the video is plain-old-stereo, send it through the system mixer!):

The amarok package (v2:2.2.0-0ubuntu2) forgets to install its MP3 decoding engine! Fix it with:

I got a webcamera from Malaysia which appears to be one of those no-name Chinese models. The box claims it is a PCCamera, the drivers install a program written by BIGDOG and the lsusb command in Linux tell me it is a “Z-Star Microelectronics Corp. ZC0301 WebCam”. I think I'll go with the USB descriptor.

This is supported by the linux drivers developed at http://mxhaard.free.fr/index.html. This is an Ubuntu package called gspca-source. Once the package is installed you create and insert the kernel-module like so:

Using lsmod you can see that it has been inserted:

To test the webcam I used camorama (a package). 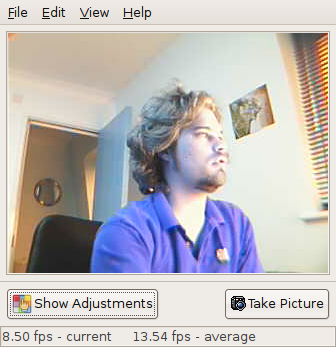 Another kernel upgrade and another problem. Upgraded to 2.6.27-11-generic for x86.

This time apps just fail with errors like “Unable to capture image”.

Apparently this is because 2.6.27 includes gspca in the kernel, but doesn't include libv4l1.so.

The workaround is simple, prefix your command with an LD_PRELOAD, e.g.:

After a kernel upgrade the webcam stopped working. I saw this in the kernel log:

Trying to rebuild with the modula-assistant command failed due to this error:

even patching the Makefile didn't help, you get:

So I downloaded the latest gspca-source tarball and compiled it myself:

I tested this via manual insertion:

Inserted without error, but then repeats this dmesg error:

some forum threads suggest that this error may mean there is a bandwidth problem on the USB hub in use - it was plugged into a hub on my desk, rather than directly into the PC.

Yup, moving it to a new USB port fixed it. Wonder if there was anything wrong with the module to begin with?!

1)
“less” is a comparative term reserved for continuous measurements, and not applicable when used to describe a discrete number of entities as we have here. Thank you Colin for hammering this into me over the years…
2)
as it turns out, it deals gracefully with read errors
3)
See http://heratech.net/blog/sham/ubuntu-910-karmic-koala-amarok-no-sound
unix/debian.txt · Last modified: 2009/12/11 00:36 by robm